Back in town – Arnold Donald

He may have reappeared on the radar only a little over a year ago, but Arnold Donald has not wasted any time in plotting a clear path for the reputational repair and future direction of Carnival Corporation. The CEO talks to Phin Foster about consensus building, the importance of leveraging organisational scale and why retiring from retirement was one of the best decisions he’s ever made.

It's a classic political adage: if you don't like the narrative, change the story.

The surprise announcement in June 2013 that Carnival Corporation CEO Micky Arison, the man responsible for its transformation into arguably the world's largest travel-leisure company over his 25-year tenure, was stepping down certainly came at a time when the story needed changing.

An engine room fire on the Carnival Triumph earlier in the year had seen the 2,758-passenger ship across the world's television screens floating without power in the Gulf of Mexico. The following month, a generator failure on Carnival Dream forced the operator to fly 4,300 passengers back to Florida from St Maarten. There also remained a lingering hangover, reputational and fiduciary, from the Costa Concordia tragedy of 2012.

Demand was down, prices were being slashed and public perception stood at an all-time low. What had been a triumphant historical epic was fast descending into the realms of soap opera.

But for the man tasked with stepping into the leading role, the sudden plot twist was equally unexpected. "I was retired, flying under the radar," Arnold Donald reveals with a hearty laugh. "It meant taking a hard look at myself, and deciding whether I wanted to get back into the race and the amount of scrutiny that would entail. Now, that attitude seems ridiculous, it's been so rewarding, but this was a big decision to make."

Donald had served on the Carnival Corp board for 12 years, but had no direct operational experience of the cruise industry and had last been at the helm of a for-profit company in 2003 as CEO of artificial sweetener manufacturer Merisant. It was Arison's recommendation that he become the first non-family member to take the hot seat, but the prospective chief executive knew he could only accept with the full backing of his board.

"I sat down with each and every member," he recalls. "The message was very straightforward: 'We've known each other a long time, and you're not going to hurt my feelings if you tell me that you don't think this is the right move. However, if you feel that way, you don't tell me and I take the job, you'll undermine my ability to deliver, and I can't have that. I'm happily retired, so unless you feel strongly about wanting me to do this, I'm out.'

"Micky may have made the recommendation, but it had to be their decision."

Arison remains as chairman, with Donald ensuring his predecessor also retains responsibility for newbuilds - "Nobody on Earth knows more about this business than Micky. Keeping him involved on the operational side benefits us all," he says - and he describes the cruise pioneer as "uncannily available".

A visible difference
However, there are marked differences between leadership styles. Perhaps the most visible aspect of Donald's early tenure is his sheer visibility. Arison traditionally shunned a great deal of media work and delegated much of the responsibility for communicating with the world's media - an approach that had drawn some criticism as Carnival entered choppy waters - but his successor was immediately leading from the front, pressing the flesh, meeting travel professionals and appearing across the news networks in a one-man charm offensive.

"Perhaps we could have been a bit more creative, but the hook of talking to the CEO seemed to appeal to a lot of media folks," he says. "The publicity we were receiving at the time was heavily weighted towards the negative, hurting the company and the industry as a whole. We knew it had to be addressed head-on, and I think you've since seen far more balanced treatment as a result."

While reputational firefighting was an immediate priority, Donald was also looking at the bigger picture. Talk to him for long enough about overall vision for the company and he continually returns to the same touch points: exceeding guest expectations, leveraging the company's scale and an eventual double-digit return on investor capital. They are intrinsically inter-related, but in order to guarantee buy-in across the organisation and deliver, the new CEO knows that such targets must come through more than simply a series of diktats from up on high.

Within his first few months in the role, Donald assembled the CEOs across Carnival's eight brands, along with his group CFO David Bernstein, for a group retreat. As well as "a number of goofy bonding assignments", he invited his execs to define what success looked like on a personal, brand and group level. "We came to alignment pretty quickly," Donald reveals. "And the fact that we got there through a process of self-actualisation makes such a difference."

Ear to the ground
The next stage was bringing in 70 company leaders from around the world and going through a similar progression, engendering group discussions and presentations, before Donald and his team pooled their findings and invited participants to vote anonymously on whether they supported the ideas being put forward.

"We'd heard what they had to say, and now it was their responsibility to tell us whether we'd understood the intent behind their words," he explains. "We had 100% alignment. I then flashed up what the brand CEOs had come up with a couple of months earlier, and both sides were virtually identical."

But alignment means nothing without execution. Donald's emphasis on creating consensus is certainly admirable, but it was the next stage of the process that was always going to prove the more challenging.

"People now know where we're trying to go, but as soon as you start asking them to give something up, it becomes real," acknowledges the CEO. "That engenders a lot of debate, but debate is healthy. In terms of moving forward, there are no ifs or buts, and people can see it's good for the whole. There's a huge amount of enthusiasm."

And employee engagement goes beyond merely getting Carnival's near-100,000 person workforce onside. Donald knows that arriving with an outsider's perspective has its advantages for any leader, but he is also clear in his intent to tap into this unrivalled knowledge source as much as possible.

"It's easy to come along and see things that aren't working so great, but when you haven't been living it every day and you don't know the business real deeply, what's more difficult to see are the million things that are working right," he explains. "If you simply fixate on the former and in the process throw away some of the latter, you create countless new problems.

"The smart thing is to listen. My fundamental belief is that guests will tell you how to exceed their expectations; you just have to take the time to ask them. Our employees will tell us how to deliver because they're out there doing it every day.

"I don't have all the answers, but I don't need to; they're all around us. My job is to create awareness, an unquenchable thirst, for understanding our guests and an ability to hear our employees. Do that and everything falls into place - the rest is just basic business management."

Building to scale
But can anything be basic when discussing a firm of Carnival's size? Arison expanded the organisation over 25 years through a strategy of fierce brand independence. From revenue management to port relationships to ship design, Donald's aspiration to leverage the group's scale will involve opening lines of communication for the sharing of best practices that have not previously existed. It amounts to a sea change in corporate culture.

"All eight brands lead their psychographic segments and are powerful onto themselves, but they've never really worked effectively with one another," he explains. "Micky maintained that fierce independence, and at the time it was exactly the right thing to do; when demand is exceeding supply you need to get the supply out there and establish the beach head.

"But we have gone from having a few ships, to a fleet, to an armada. There's so much scale, and that scale matters, not just in terms of finding efficiencies but also through driving revenue."

Of the former, the figures are startling. While Carnival Corp tackles fuel purchasing and payroll as an integrated group, that still leaves $6 billion of largely uncoordinated annual expenditure. The organisation buys 250,000 pairs of shoes a year. It's the fifth-largest purchaser of airline travel in the world. Donald is vague on what savings might be achievable, but when one thinks that just 1% amounts to $60 million, it can only impact favourably on the bottom line.

Consensus on competition
However, it isn't savings that Donald sees driving growth. Increasing revenue is the name of the game, and the most significant impact will not come through additions to the Carnival armada, but through ticket and on-board expenditure.

"We have 102 ships, so even if we build two or three a year, it's only going to amount to less than 2-3% growth," he explains. "There aren't enough shipyards in the world for us to build ten annually, and that would still leave us in single digits. We can't put more people on the ships, they're already sailing full, so it's about increasing demand and on-board revenue streams.

"Right now, we have almost 80 million passenger cruise days a year. $10 extra a day per passenger equates to $800 million. The question is, how do we get $70 more per passenger per week? I can find some in ticket prices, some in speciality dining or entertainment, onshore excursions, communications, gaming - there are a million ways. And because we haven't traditionally been aligned across the brands, a lot will just come down to tweaking what we already do, sharing best practices. Scale gives us so much opportunity, and we'll need it in order to get that double-digit return on investor capital."

The enthusiasm Donald demonstrates for the challenges ahead belies the fact that he was well removed from the fray of corporate leadership a little over 12 months ago. A married father of three and a grandfather to six, the impression he has made on colleagues and industry peers over his first year
at the helm appears to have been overwhelmingly favourable - Norwegian CEO Kevin Sheehan has even gone on record complimenting his dance moves - and the New Orleans native's commitment to consensus-building stretches well beyond the confines of his own organisation.

"The first year has been an absolute blast," he enthuses. "There seems to be a common bond among people at sea, everybody looks out for everybody else, and they've all been so welcoming. As an industry, we have a good history of working together on the regulatory and compliance side, but I would like to see us collaborating more on building demand.

"In theory, we compete with one another, but the real competition is land-based vacations. A cruise holiday is the best value there is, in all segments, but that message is not always made clear. We could work a lot more together educating an uneducated public."
It sounds like a story the entire cruise industry will be a lot more enthusiastic to tell. 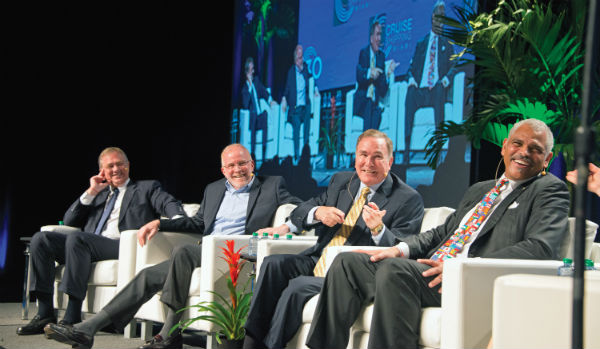 Better together: Donald with (left to right) Pierfrancesco Vago of MSC, Kevin Sheehan of Norwegian and Richard Fain of Royal Caribbean, offering a glimpse of the kind of more united front that the Carnival Corp CEO hopes the industry will begin to move towards in an effort to promote itself more widely.