How a CEO responds to misfortune, and how well the organisation bounces back as a result, is a true test of their worth. Barry Mansfield talks to Nokia CEO Stephen Elop and Sergio Marchionne, chief executive of Fiat, about how they were able to revive their respective companies due to diminished market share, strikes, the eurozone crisis and oversupply issues.

Nokia's determination to rejoin the race with Apple and Google's Android has seen the world's largest phone maker burn through over €1 billion (£830 million) in a year, with unit sales of smartphones declining 31% in the last quarter. However, investors appear to be satisfied with CEO Stephen Elop's forecast that the company will reverse a €954 million loss in the fourth quarter of 2011 to reach break-even point during the first quarter of 2012. The company's share price has also held up.

In 2007, Nokia was the world's largest mobile phone maker, but executives failed to acknowledge the technical shortcomings of its aging Symbian platform, or the futility of their attempts to push mobile Linux. iOS and Android devices have devoured Nokia's market share (now at a 14-year low) and severely punished its market capitalisation, which is down 80% from its 2007 high. When former Microsoft, Juniper Networks and Macromedia executive Elop took the helm, he insisted that the current transformation in the mobile sector was the result of a stand-off between rival ecosystems, not platforms.

On the question of how to keep up with the pace set by Apple, which shifted 37 million units in the fourth quarter of 2011 alone, Elop insists: "We don't look at it as the elephant in the room not to be discussed. It's actually front and centre for us... we've established an environment where there are now three ecosystems competing."

There is also a detailed strategy afoot to tap into emerging markets. "We're very focused on taking the next billion people to the point where they can have their first internet experience," Elop elaborates. "The Asha family of products is designed to help first-time device users to have their first browser experience and to do so in a very cost-effective way. To get their first experiences with social networks, for example, on devices specifically targeted at those markets, and those price points."

Under the stewardship of Elop, a Canadian citizen and the first non-Finn to serve as Nokia's CEO, the company has switched to a bold new operating system for its high-end phones - and initiated a special partnership with Microsoft. This resulted in the launch of the Nokia Lumia 800, powered by Windows Phone 7. The company has kicked off 2012 in style, releasing both the Nokia Lumia 710 and the LTE-enabled Lumia 900 worldwide and launching a new version of the Symbian OS, now known as Nokia Belle, for its older and entry-level phones.

ZDNet's James Kendrick described the Lumia 900 as "the best phone shown at the CES", praising the 8MP rear camera with Carl Zeiss optics as "maybe the best on any smartphone". According to reports from Dutch retailer Typhone and Russian analyst Eldar Murtazin, this feature looks set to be followed up with a 12MP camera and 21Mb/s HSPA+ connectivity on the 900's eagerly awaited European sister the Lumia 910. Elop is happy with the "very good progress" of the range, which has shifted well over a million units in the last year.

Meanwhile, Standard & Poor's has expressed doubts that Nokia can differentiate itself from its rivals. Analyst Tomi Ahonen has described the Microsoft strategy as "mad" and "corporate suicide", suggesting that Nokia's now-defunct MeeGo devices "outsold Lumia" based on "an independent analysis that says MeeGo sold 1.4 million units in Q4". He also stated that the latest results were "brutal" and that "Windows Phone will not save Nokia". Elop responded by announcing the Symbian-based PureView 41MP camera phone.

He stresses that Nokia is "in the heart of our transition". This restructuring has so far involved ceasing operations at manufacturing facilities in Hungary, Mexico and Finland, and switching the function to existing facilities in Asia, although some customisation work will continue to be carried out at the three former sites. He maintains that Nokia's operating margin in the first quarter of 2012 will be around break-even, but opted to abandon annual guidance targets due to the unpredictable macroeconomic climate.

There appears to be time and room for manoeuvre at Nokia, since the firm has massive financial reserves to fall back on. The company had cash savings of €5.6 billion in January 2012, with Microsoft adding a further $250 million in platform support payments. In the second quarter of 2011, the company received a one-off payment of €430 million from Apple to settle a long-running patent dispute. Sales at NSN for the same period were up by 20%. January's YouGov BrandIndex survey suggested that Nokia was the most trusted smartphone brand of 2011; it managed to beat Apple, Samsung, HTC and more to retain the top spot on brand strength in the UK.

"There appears to be time and room for manoeuvre at Nokia. The company had cash savings of €5.6 billion in January 2012, with Microsoft adding a further $250 million in platform support payments."

Elop freely admits that the company has a stiff learning curve ahead of it in consumer retail. He also concedes that sales teams in the channel aren't helping and has detailed the situation country-by-country. Nokia paid out a slightly higher-than-expected dividend for the last year, which has appeased investors.

Chairman Jorma Ollila expects Windows Phone 7 OS in Nokia handsets to negatively affect sales in 2012, but says he is confident that the company will pick up the pace later. Nokia also plans to introduce a tablet PC based on Microsoft's Windows 8 operating system this year. According to Morgan Stanley, Nokia's revamp should pay off in 2012 with its own Windows Phone shipments likely to hit 37 million units, doubling to 64 million in 2013. By contrast, Morgan Stanley reckons that HTC will sell six million Windows Phone smartphones this year and ten million in 2013.

In 2012, Fiat presented a €20 billion plan to crank up production in Italy to 1.4 million vehicles a year by 2014 (from 650,000 in 2009), in return for labour concessions from workers. However, production of cars in the nation dropped 15% to fewer than 500,000 vehicles in 2011, according to carmakers' association Anfia, and Fiat is now coming to terms with some testing market conditions.

Firstly, there was February's news of forthcoming union protests, with Italian metalworkers union Fiom announcing its intention to stage an eight-hour nationwide strike against the government's plans to relax rules on job security. To make matters worse, Fiat's European car sales fell 17.6% in January from the year before, leading chairman and controlling shareholder John Elkann to call for a "rethink" on how to cope with "a new low ebb in terms of car sales" in Europe. In Elkann's estimation, Italians are buying fewer cars in 2012 than they did in 1985.

Fiat said in February that earnings before interest, taxes and one-time items, which it calls trading profit, will increase in 2012 to between €3.8 billion and €4.5 billion, up from €2.39 billion in 2011. Fiat chief executive Sergio Marchionne is relying on Chrysler to power growth at Fiat, whose volume brands lost about €500 million in Europe last year as the region's debt crisis forced consumers to limit their spending. Sales fell 6% year on year for the month of December and are forecast to fall again this year, with oversupply issues widely recognised in the industry as the root cause of this decline. Analysts are describing Europe as the sector's "sick man".

Fiat is also vulnerable to the euro crisis because of its exposure both to the troubled Italian economy and to compact cars. "If you don't see growth, whoever's left at the table is going to be left fighting for scraps," the CEO of Fiat and Chrysler Group told the Financial Times in Detroit. "We've got the mass car market in Europe, which is economically unproductive and which, just in raw, pure economic analysis, does not deserve capital allocation," he told analysts on a conference call. This sentiment has been echoed by fund managers, including Gregory Moore of Paris-based Montsegur Finance, who declared simply that "there are just too many carmakers in Europe". The fund itself holds Peugeot stock among €150 million in assets under management. "One way or the other, there will have to be mergers," he adds. Moore did increase the Peugeot holding in November, however.

Machionne, a 60-year old former Deloitte accountant and UBS vice-chairman, is satisfied that the eurozone crisis is now over for Italy. "With the appointment of Mario Monti as PM, a lot of the uncertainty surrounding Italy has been diminishing," he says. "It is beginning to rejoin the ranks of the acceptable. Monti needs our full support and the political forces need to back him in this journey, as it's in everybody's interests."

However, billions of euros of aid extended to European carmakers in 2009-10 - including scrappage and the €6 billion French bail-out of Peugeot Citroën and Renault - may have merely postponed much-needed restructuring. Analyst UBS suggested that Peugeot Citroën should consider an alliance with Fiat in order to catch up with European market leader Volkswagen; statistics from LMC Automotive show that Europe accounted for 45% of Fiat sales in 2011 and 54% of PSA's, the highest share among major automakers.

Marchionne declared that he would "certainly take a look" at PSA, adding that Europe needed a new car giant able to rival Volkswagen's 23.3% market share - but he denied press rumours that talks were already underway. Meanwhile, the French automaker is "completely open" to any collaboration that enhances performance while preserving its independence, according to PSA chief executive Frederic Saint-Geours. Marchionne said in February that an initial public offering (IPO) of Chrysler is the least likely of three options, which include a full acquisition of the American carmaker by Fiat and a merger of the two companies by 2015.

He also stressed that Fiat has no plans to offload its Alfa Romeo division because it "needs the brand" for the revived US market. He again reiterated his vision that Fiat could be an "active partner" and confirmed an €850 million deal with Russian bank OAO to begin the production of Jeeps in St Petersburg and Moscow over the next 24 months.

Italian-born Marchionne says the 2012 target for the Fiat 500 is between 25,000 and 35,000 for the US. He said the Mexican plant making this model for the US can continue to operate profitably by exporting vehicles to South America and China. However, it is imperative that the company takes advantage of the US car market, he says, to make up for the scarcity of demand in Europe. Separately, failure to produce competitively in Italy could force Fiat to shut two of its five domestic car factories. The firm moved production of its subcompact Panda back to Italy from Poland, but made the decision to close down its Sicilian factory at the close of 2011.

The boss has been here before; taking charge in June 2004, Marchionne manage to propel the carmaker back into profit in just a year by cutting the workforce and speeding up the introduction of new models, such as the retro Cinquecento.

This time, Fiat is aiming to cultivate a mixture of power and fuel efficiency to satisfy the tastes of European and American drivers, while a performance version of its new third-generation Panda city car is also thought to be on the drawing board.

Fiat has also scheduled a September launch for a pair of 4×4 models, and the eco-friendly 2012 Punto's two-cylinder 'TwinAir' low-emission engine will be road tax and congestion-charge-exempt in many cities. Having picked up the 2011 Dwight D Eisenhower Global Leadership Award in recognition of his turnaround work at Fiat, Marchionne knows his job is not done.

"We're on the move," he insisted, confirming that he would stay in his role until at least 2015. 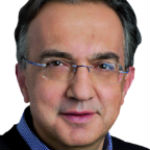