From sluggish growth to the eurozone crisis, Brexit was just the latest setback to hit the EU. However, some business leaders see the current malaise as a chance for radical reform. Andrea Valentino talks to Martina Larkin, head of Europe and Eurasia, and member of the executive committee, at the World Economic Forum, about the opportunities Brexit presents for the EU, and how business and government needs to work together if they want to thrive in the digital age.

On the morning of 24 June 2016, as it became clear that the UK was leaving the EU, the BBC cut to an exhausted journalist outside the European Commission in Brussels. Even though it was barely dawn, lights glimmered in the windows above his head.

“I doubt anybody in the building behind me will have got any sleep,” he guessed. “They will be incredibly nervous about what they’re seeing.”

Rightly so. For many Europeans, Brexit was just the latest in a line of disasters stretching back years. Over the past decade, from the fiasco in Greece to the refugee crisis, it has often seemed like the European project was careering off a cliff.

These specific challenges are accompanied by more general problems. Since 1996, pan-European growth has spluttered along at an average of 1.72%. Mediterranean countries are in especially bad shape: since the financial crash, Italy has barely managed 0.5% growth. Unemployment is also high, especially in the south. In Spain, 38% of young people are looking for work. Nearly half of all Europeans see globalisation as a net negative. Marine Le Pen’s diatribes against globalisation and European integration pushed her into the second round of the French election. These worries have swung back to business executives. According to a recent UBS poll of 1,200 European companies, over 25% see Brexit and the future of the EU as their biggest threat.

There are signs of change, however. While the EU scrambles to fix its immediate problems, some in the business community are taking the initiative. Rather than going from one emergency to the next, they want to fundamentally reform the EU, and the link between workers and their employers. Out of the current turmoil, they see a chance to improve life for all Europeans – and their relationship to business.

A new narrative for Europe

Martina Larkin is in a good position to push these changes along. Over a long career, she has worked everywhere from the Network of Global Agenda Councils – a braintrust of over 1,600 global experts across multidisciplinary fields – to Lazar & Company, a New York investment bank. Before that, she held positions at Nestlé and studied at Yale. Now, as a member of the executive committee at the World Economic Forum (WEF), Larkin hopes to shape a “new narrative for Europe”. Perhaps it’s this wealth of experience that makes Larkin so optimistic. Unlike many other Europeans, she sees the Brexit shock as the perfect time to reform.

“Brexit opens up the discussion about Europe in a very big way,” she says. “The task now is to turn it into something positive that could strengthen Europe and the UK. On the one hand, I think Brexit is a sign that democracy works. It shows the discontent and anger of voters in the UK and across Europe. It started a conversation that people perhaps weren’t [having] at the level it needed to be held. I think it’s an opportunity for Europe to reinvent itself and deliver for its citizens. We have to be bold and ambitious.”

Larkin is keen not to let this confidence slide towards complacency, though, and clearly understands the challenges the continent faces. “I think Europe has spent the best part of a decade fighting for its survival,” she admits. “These crises haven’t really subsided. [After] the aftermath of the financial crisis and the migration crisis, [there came] the upcoming elections [in France and Germany], as well as all the worrisome right-wing developments and the rise of nationalism.”

Broader economic trends are also a concern, notably the howling gap between rich and poor. With the poorest 10% of Europeans earning just 1% of the average continental wage, this is clearly a problem, especially as it pushes people towards extremist parties.

Another longer-term worry is climate change. “How does Europe remain a leader in achieving sustainable development goals, and also become a leader in tackling climate change and the energy crisis?” asks Larkin. “The environment is perhaps the issue that young people are especially concerned about. Europe has been taking a strong role, but can do more, particularly if we want to sort out some of the [other] crises that are holding it down, like migration.”

While her organisation plans to host events at Davos next year, much of Larkin’s work focuses on the concerns of regular Europeans, especially the young. Through a number of hubs scattered in cities across Europe and beyond, the WEF gives kids a space to improve their lives.

“We felt that youth weren’t integrated enough into the political decision-making process, and hadn’t really been heard enough,” adds Larkin. “We wanted to give them a voice to share their visions for Europe.”

The project has already seen some tangible success. In Athens, for example, volunteers are helping match unemployed youths with suitable employers.

What is to be done?

Giving young people a chance to shape their future is admirable, but they can hardly reform Europe by themselves. Business also has a huge role, one which Larkin claims it’s taking up with gusto.

This seems like a sensible priority. After all, the so-called ‘fourth industrial revolution’ is already upending the European labour market. As jobs are automated or shipped abroad, traditional workers are finding themselves trapped with useless skills in a changing world. The obliteration of communities from Newport to Picardy shows what happens when workers are left in the lurch. One solution is for businesses to train staff over their lifetimes, teaching them about new technology as it appears.

“We have a few ideas about how you can develop better skills programmes,” Larkin says. “[One is] to integrate learning into the workday. Another is to encourage lifelong learning. We’re also encouraging business to develop visa programmes for highly skilled migrants and entrepreneurs in the tech industry, something other countries have done. We want to try and set a standard for all forms of education across Europe.”

Larkin is also hoping businesses will rethink how they deal with tax, especially after recent scandals.

“How we tax technology companies like Google and Facebook is very contentious at the moment,” she concedes. “But it’s something we’re discussing quite a bit. Going forward we’re interested in developing legal and ethical standards to ensure the trust of citizens in these [new] digital societies,” she continues. “This could be done by establishing ethics commissions, or better regulatory standards, for example.”

According to a recent UBS poll of 1,200 European companies, over 25% see Brexit and the future of the EU as their biggest threat.

All this is likely to please regular Europeans, but Larkin knows that selling reform to industry is more difficult. Still, she thinks business can be encouraged to change, if only out of self-interest.

“Businesses want to have a say in how the future will look, as that’ll help them,” she explains. “They are at the forefront of this transformation – which is taking place digitally and technologically – but also in terms of inclusivity, where growth really needs to be rethought. Rather than just being on the ‘passenger’ side, business wants to have a seat at the table. This is a crucial aspect of how we find solutions.”

Larkin also sees cooperation between business and other stakeholders as vital to fixing Europe’s problems in the long term, highlighting climate change as a priority.

“Business is playing a major role in driving forward action on the environment,” she explains. “I think this is the way forward: I can’t see how else we would find solutions to these huge problems if business is not a major factor in taking action, and being part of a solution for Europe and the world. One of the biggest ideas that’s been circulating recently is the idea of a more flexible Europe. The solution involves grouping countries and stakeholders around different topics, rather than a centre that builds out.”

This is part of a broader trend of government and business cooperation. “We don’t live in a world where two CEOs or two political leaders can decide how they want to run the world,” Larkin emphasises. “Power is now much more evenly distributed, [because] people feel empowered through technology. This affects business as well as the rest of society. This interconnectedness – this hyperconnectedness – is something that the business community will have to play more of a role in.”

Whether these ideas can be shaped into positive action remains to be seen. Brexit looms unresolved, while Catalonia’s referendum risks bringing chaos to a new corner of the continent. But in an uncertain age, Larkin’s focus on European cooperation seems prudent. Given the scale of the challenge, it might be a while before many Brussels bureaucrats get a decent night’s sleep.

The World Economic Forum has focused on improving the lives of young people. 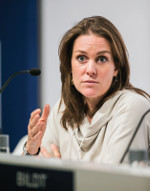