Trying to predict consumer demand often leads to supermarkets over-ordering and ultimately wasting swathes of fresh produce. Chris Godfrey speaks with Jenny Dawson, founder of Rubies in the Rubble, to find out how a better understanding of customer demand is helping her business thrive, and use the UK’s mounds of surplus food.

It is fair to say, 2010 was hardly a good year for anyone - even the bolshiest entrepreneur - to consider starting a new business. The global economic crisis was in full swing, with entire countries defaulting on their debt, businesses collapsing under the pressure and thousands losing their jobs worldwide. The unpredictable climate and talk of a double-dip recession across the eurozone hardly instilled the confidence aspiring business owners were looking for.

It makes Jenny Dawson's decision to quit her comfortable job at a Mayfair-based hedge fund in November 2010 and go rifling through pallets of disfigured Kenyan mangetout at her local wholesale market all the more bizarre. But after taking crates of unsold fruit and vegetables home with her, and subsequently finding nothing wrong with them, her fervour to tackle the problem of food surplus only grew. Shortly after that first visit, Dawson chose to ignore the ubiquitous warnings of market uncertainty and set up her own company with the aim of turning perfectly healthy food waste into luxury jars of chutney.

Even in the era of big data, where consumer habits are meticulously monitored and exploited, supermarkets struggle to accurately predict customer demand. Their solution to this age-old problem is a simple one: stock everything, all the time. It's the business strategy equivalent of hedging their bets and arguably represents the safest option in terms of profit margins. But in reality, it's a modus operandi that leads to gross surplus, encouraging food wastage from everyone - farmers to consumers, and wholesale vendors to the supermarkets themselves.

Waste not, want not

According to the UK Government's most recent report, 15 million tons ended up in landfill sites in 2011 and 2012 - equivalent to around a third of total food and drink bought that year. Just under a quarter of all vegetables and around a fifth of fruit is wasted, with over 500,000t simply not used in time. At a time when more and more people are turning to food banks, the statistics are something of an embarrassment.

Such figures were inspiration for Dawson though, who set out to reduce them with her business, Rubies in the Rubble. Spurred on by an article she'd read on dumpster diving, the art of reclaiming discarded food from bins, she began to research wastage across the entire industry.

"It just made me start thinking about how whether it's down to unpredictability or whether supermarkets were just trying to lavishly present and supply everything for everyone the whole time," says Dawson. "In that whole process, there must be a lot of surplus; you could never match supply and demand. The more I looked into it, the more I realised the implications [not just] financially and environmentally, but morally too.

"I wanted to start a really fun brand that champions the wonky and the surplus fruit and vegetables. That was the start of Rubies in the Rubble. I thought it was going to be a fun project where I could also try and change people's opinions and raise awareness. It started with chutneys because my mother used to make them and I thought that was the traditional way of preserving things - for giving fruit and veg a new life."

Eventually, Rubies in the Rubble opened a kitchen in London's Spitalfields Market where it sold jars of chutney while learning about the nature of the industry from traders and experimenting with different recipes from all their excess. Since then, it has expanded in scale and portfolio. And while her company may have risen out of the unpredictable supply of irregular produce at wholesale markets, as Dawson ventured further up the supply chain, it became obvious that wastage was anything but unpredictable.

While supermarket leftovers are an offset of over-ordering and the erratic nature of consumer demand, farmers are at the mercy of the increasingly unpredictable patterns of nature itself. Unexpectedly favourable weather may produce a boom in harvests, but with no one willing to take them, they're left with thousands of tons of excess ingredients every year. And with supermarkets issuing stringent specifications on the size, weight, shape and other factor on their produce, even the most diligent farmer will struggle to eliminate wastage.

"One of the reasons for leaving our kitchen last April was because the more we grew the more we realised that actually the main amount of surplus wasn't on these wholesale markets," says Dawson. "So we started getting in touch with large-scale farmers, and now we work directly with them and pack houses. There's one farmer we're working with at the moment who estimates he has about 15t a week being discarded of perfectly good tomatoes. But it's only 1% of their production, so they are very good with their surplus but it's just the nature of it."

Farmers may have no way of predicting the exact figures of each harvest, or the characteristics of each individual unit, but luckily Rubies in the Rubble is transforming this uncertainty into a respectable business. It's not sourcing excess fruit and vegetables that's the problem; it's processing the sheer quantity that's out there.

"I'd love to get to the day where we can't get enough surplus, but that's not likely to be any time soon when we're working with pack houses that are wasting bananas that are either over-ripe or the wrong curvature," says Dawson. "There's just a supply and demand imbalance."

There will always be surplus available for Dawson's business, but without the same specifications and with limited knowledge of what ingredient is coming in next, guaranteeing uniformity among products, or even their availability, is not always possible. And in an increasingly unpredictable business climate, the ability to take her business to the next level is dependent upon a much greater understanding of exactly what her customers are looking for.

"In an increasingly unpredictable business climate, the ability to take her business to the next level is dependent upon a much greater understanding of exactly what her customers are looking for."

"I think really knowing what you're customers want, where they are and how they eat, where they spend their day and where they're shopping, is a big factor to overcoming unpredictability," says Dawson. "One of our points is that we will never be wholly consistent, that we will try our best to have exactly the same paste and things, but we're going to work with the seasons. We may vary the apple that we use or the type of tomato and that's going to give a bit a change to the product, but we believe that's what you're buying into. When you buy our brand, it's real.

"Our big challenge is that we're trying to satisfy a consumer demand in terms of getting the product right, but then we're also held by the raw ingredient and it's always about finding a glut of something; finding where there's large volume of surplus and working with that product. But there's a growing trend for seasonal ingredients as more start caring about how they got there."

The larger movement towards sustainably sourced goods may bode well for Rubies in the Rubble but it doesn't help determine exactly what products it should be producing. It's a problem that businesses in all sectors face - how to translate the big, sometimes obvious, trends into new products, targeted supply and ultimately growth.

Loyalty cards may have originally been introduced for the reason their name suggests, but in recent years the data they're providing supermarkets and retail outlets has proved vital in tracking customer habits and understanding what products to stock, when. They can track how effective their promotional strategies are by monitoring when customers conduct their shopping, and they can determine the likelihood of selling out of certain ingredients, allowing companies to make evidence-based decisions on strategy.

Supermarkets are also gathering data from other sources to supplement that which they've already collected on their customers. The Office of National Statistics, the Land Registry and electoral roll are just some of the databases chains have plundered for consumer information in a bid to increase their understanding of demographic. Such is the value of big data that Tesco purchased the crucible database, selling access to its exhaustive content to other big consumer groups.

Without the resources of larger companies to initiate in-depth research into changing consumer demand, patterns and attitudes, Dawson is reliant almost entirely on customer feedback and understanding their changing habits. But this back-to-basics approach, in an extremely overcrowded market segment, allows Dawson to act on customer feedback much faster and fluctuate with changing trends.

"It gets quite expensive to research, so I'm sure they've got a one-up on knowing and tracking trends," she says. "For us, the way of doing things has always been to trial things small, get as much feedback from people as possible, then to really go for it. We're now developing a range of snack products for this summer that we're really excited about as it's a product that is an everyday buy, but also it's something that we can really brand and market the message on the packaging as well."

In such a heavily saturated industry, Dawson believes making an impact and getting her product portfolio on shelves will require not only a special bond with their customers, but also the ability to quickly innovate and adapt to new trends as soon as possible.

"We're constantly looking at what other people are doing, what's new and up and coming, and especially what the US is doing as well, as they're quite innovative with food trends," says Dawson. "But we're also playing with things that we like personally as well. As I think it's much easier to sell a product that you're obsessed with."

Her obsession may have arisen out of a desire to tackle the regrettably high, yet ultimately predictable, levels of food wastage, but for Dawson, there's one forecast she's adamant will see her business grow even further: "We believe that food waste will be the next stigma; it'll be something that is frowned upon in the same way that littering is, as it's just such an ugly thing to be doing." 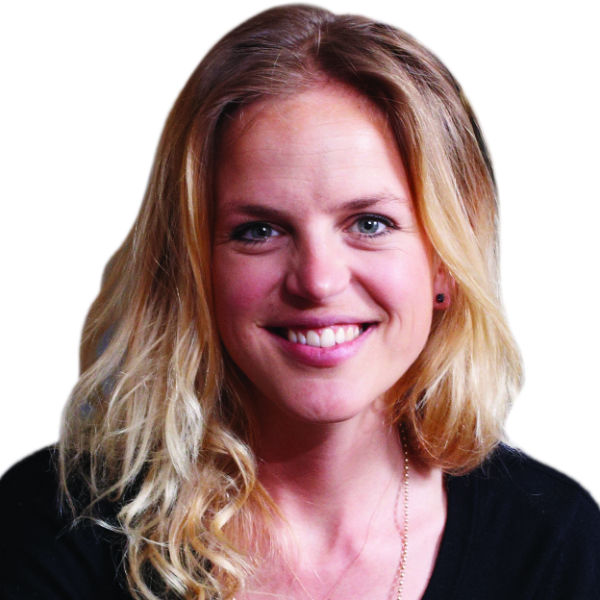 After graduating with an MA in mathematics and economics in 2008, Jenny Dawson worked at Odey Asset Management for two years; however, having always had a heart for sustainability and good food, she left in 2011 to launch a food brand called Rubies in the Rubble. 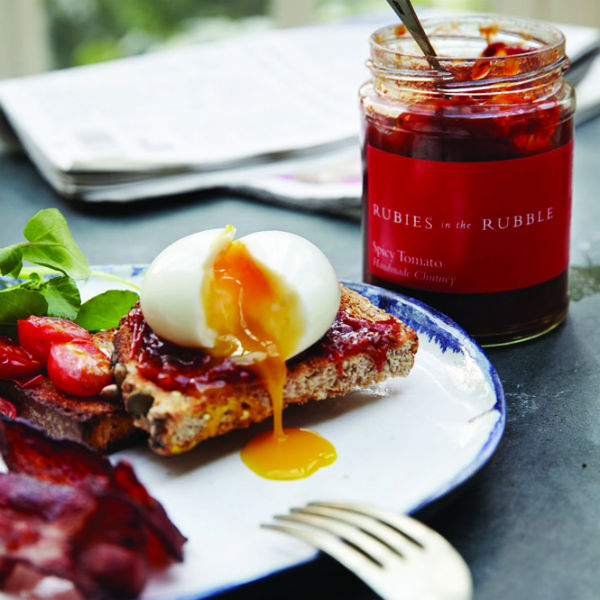 Farmer’s unsold produce can now find its way to the table. 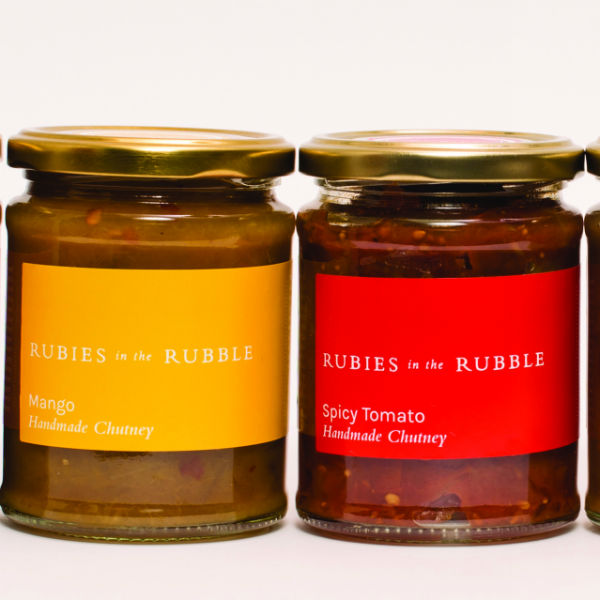 Dawson’s company produces a range of chutneys and preserves from surplus ingredients.