Richard Solomons: man with a view

Richard Solomons is in fine spirits. I am talking to the new chief executive of InterContinental Hotels Group (IHG) just after it reported a strong first-half performance for 2011. Enjoying a 17% profit increase - revenue for the six months was £520m, compared with £472m for the same period in 2010 - results have been driven by a surge in occupancies and room rates.

Other factors behind the group's impressive returns this year have been the performances of brands such as Holiday Inn, Holiday Inn Express, Crowne Plaza and boutique line Hotel Indigo. Today, its business model comprises 4,400 hotels with another 1,100 in the pipeline.

It has been an auspicious sta "Today, InterContinental Hotels Group's business model comprises 4,400 hotels with another 1,000 in the pipeline."rt, although you could argue that Solomons is in the fortunate position of inheriting an impressive legacy from Andrew Cosslett, whose decision to step down in March was met with surprise across the hotel industry. Having succeeded Cosslett in July, Solomons is quick to extol both the efforts of his predecessor and IHG's wealth of human resources, which has buttressed IHG's achievements over the years.

"I recognise the contribution that Andy made to IHG's success in his time here," he says. "However, there is also a strong team on the executive committee, many of whom have been here for many years, and have been key to our many successes."

Solomons appears to be very much the team player. In his previous incarnation as CFO and head of strategy, the 49 year old, who has been with the group in various guises since joining in 1992, played an integral part in both back-room and front-line activities, working closely with Cosslett on global strategy and development.

"I joined IHG because I wanted to be part of something worthwhile and where I could make a genuine difference," he says. "My CFO role was one of the best in the field. As a fast-moving, global business, I was very involved with the front line, customers and owners."

While Cosslett comes from an extensive marketing and branding background, Solomons, who spent the early part of his career as an investment banker, is the latest member to join the fast-growing C-suite club of finance directors who have stepped up to the CEO plate.

According to findings from the annual Robert Half FTSE 100 CEO Tracker, 49% of serving CEOs in the current FTSE 100 Index have financial backgrounds, compared with only 31% in 2008. Solomons attributes the trend to the current economic climate, in which acute financial acumen carries an even greater onus within company boardrooms.

"Sometimes it is about what is right for the times," he says. "Maybe as a result of these stressful economic conditions and the regulations that come with it, CEOs from CFO backgrounds are more appealing. I'm under no illusion that I was lucky in being a CFO at a time where this transition was commonplace. In a few years' time, it could well return to marketing or HR people again."

Given his mounting involvement in boardroom decisions over recent years - he has been a board member since 2003 - you would assume that it was a natural passing of the CEO baton.

"Accepting the role was an easy decision to make," he says. "I look at it more as an extension of the role I was doing as part of the senior management team rather than a fundamental change; however, that's not to say that it was completely automatic. There are lots of other disciplines from which one can become a CEO."

Into the third phase

Despite his dovetail suitability for the role, Solomons isn't taking anything for granted. While the markets have shown signs of recovery, the hotel industry is still not out of the woods. In IHG's case, having undergone a successful reconstruction phase after the demerger from former parent company Six Continents in 2003, and weathered the storm of the downturn - it managed to maintain its dividends; something many of its competitors failed to do - it has progressed to what Solomons calls the "third phase".

"We're now into the third phase of IHG's independence, which is defined by high-quality growth," he says. "This requires us to really deliver consistently and rigorously against our plans, not only because our investors expect it, but also because we have thousands of hotel owners who rely on us to make their businesses successful. That's a clear focus for me."

So what will galvanise this growth? Despite having only been in the role for just over a month when I speak to him, Solomons is already looking to make a number of investments in human capital.

"IHG is the largest international hotel company in China, with 142 hotels in operation and another 150 scheduled to be built."

"The front line in a business like ours is absolutely crucial," he says. "We currently have 35,000 people in our family - over the next few years we will look to recruit another 160,000. I'll also be spending a lot of time over the next six months and beyond getting to know all of our top executives and high-potential people.

"That is something we are already putting in the diary - proper succession planning and talent reviews. While the physical product - the actual hotels - is obviously important, it's all about the people behind it. You have to attract, develop and retain the best people because those are the key things that drive success. I guess it's a bit of a cliché, but creating the right team and aligning that team against clear targets and objectives is absolutely crucial."

In terms of growth opportunities, similar to other global hotel brands, all eyes appear to be on China.

Currently, IHG is the largest international hotel company in the country with 142 hotels already in operation and another 150 scheduled to be built. The group is in the process of developing a new brand, as yet unnamed, with a view to capitalising on existing growth in the upscale sector by offering domestic Chinese brands the opportunity to operate under the IHG umbrella.

"We've already signed letters of intent with hotel owners interested in the brand, even through we haven't yet named it, let alone defined its exact specifics," says Solomons. "But they have an interest in it and recognise that as the biggest international hotel operator in China, we are probably a good company to partner with."

Solomons' enthusiasm for the future is palpable, as you would expect from a man in charge of the world's biggest hotel company. When readdressing development in China, he is confident that it will become a springboard to successful expansion into other Asian regions.

Throughout our conversation, he frequently alludes to the long term. Is this something that will underpin IHG's business strategy under his helm?

"I very much believe in making the right long-term strategic decisions," he says. "The strong results we achieved and the market share we gained are the logical outcome of things that we have been doing for many years.
"It might sound trite, but you don't turn around a big business in a sustainable way with short-term decision-making."

Solomons tells me of his proclivity for "travel and working in a business where there is a lot of change".

Given his recent promotion and the latest market movements, he appears to be in the right job. 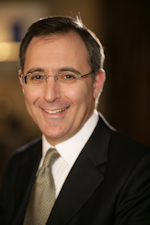 IHG is the largest international hotel group in China, with 28 properties in Shanghai alone.

In terms of growth opportunities, all eyes appear to be on China.