Air control – the evolution of Finnair

Now two years into his tenure as CEO of Finnair, Pekka Vauramo, who moved from heavy industry to aviation, is overseeing the company through the European launch of the next-generation Airbus A350 XWB aircraft. With the airline poised for growth, Carl Friedmann sits down with the CEO to find out if a smooth take-off is forecast.

Carl Friedmann: How has Finnair been instrumental in making Helsinki Airport a major transfer hub between Asia and Europe?

Pekka Vauramo: There was a recent finding that the shortest way to certain parts of Asia is via Helsinki either with or without a stop. So Finnair started to look to fly to major places in Asia - we were the first European carrier to fly to Tokyo and Beijing. The Tokyo flight started in 1983 with a specially equipped DC10. In 1988, when Russia opened up the Siberia route, we started the Beijing flight; now we have 15 destinations in Asia.

Finnair aims to double the revenues of its Asian traffic via Helsinki by 2020. What kind of position are you in now to make that happen?

We are just about on track with that, and with the latest news on airbus orders we will have the capacity to do that. We haven't grown in capacity for the past two or three years; we have stalled in that regard, but we're starting to see new growth as the A350s will take more passengers, so that's where the increase primarily comes from.

We will be replacing our A340s so we're not adding more wide-bodies but there are more seats on every new aircraft than the ones leaving our fleet.

All flights east, especially to Asia, require you to fly in Russian airspace. Given the geopolitical sensitivity of the area, how will Finnair be affected if sanctions and embargos persist, and Russian airspace is restricted?

In practical terms, we are not affected at all. There's a certain region of eastern Ukraine that we don't fly over, and the impact of that is very marginal - maybe 15 minutes on a couple of our routes. Primarily, we use the Siberian route, which is far from those affected areas. Despite speculation, we've been able to fly every flight. There hasn't been any impact on our operations.

As the European launch customer of the next-generation airbus, how have you improved the new cabin design?

We've done a lot on our existing wide-bodies. We've changed our business-class seating since last year, so almost all of the seats go fully flat. We've upgraded the service with increased leg space in business and economy from last year.

Finnair's plan is to begin operating its first A350s to Shanghai, Bangkok and Beijing, with Hong Kong and Singapore. I understand 11 firm orders and eight options for A350 aircraft will form the backbone of the company's long-haul fleet and drive expansion plans. With this strategy, what other routes or regions do you find attractive in terms of emerging markets? How will fleet size grow as well over the next few years?

We are looking continuously at what Asia can offer. China is growing and there's more and more people wanting to travel to Europe from there. There are cities emerging, like Xi'an and Chongqing during the past two years, as new destinations, and those are really the places where we see Chinese tourists getting on board and coming to explore Europe. From those two cities, it's mostly the Chinese coming to Europe, but Beijing, Shanghai and Hong Kong are more balanced.

The A350 is also a major investment, the next phase of the company and a long-term investment - one which started almost ten years ago - and we'll fly with those planes for the next 20 years or so; we'll be a whole new generation of Finnair people during that time. It's also a source of competitiveness. We have the latest technology and lowest fuel costs, and in this business it can give use more revenue potential. We can carry more passengers and more cargo in a relatively short term.

Finnair is upgrading its business-class cabins, has just launched a new premium lounge at Helsinki airport and is introducing new enhancements to its frequent-flyer programme. What other initiatives are you spearheading to not only engage your existing customers, but also attract new ones?

We started early on - as an airline - with Facebook, but then very quickly evolved to other channels like Twitter. We even managed difficult situations like during the Icelandic volcano disturbance in 2010. And it's turned out in situations like that social media is an easy way to talk to people who need to be reached with information in real time. And it's better now because everything is mobile.

What are your priorities at the moment?

Every airline is suffering from profitability, so we're continuously working on that. At the end of last year, we completed our cost-cutting programme. We achieved what we needed to achieve, but it's not enough just to cut costs. We also have to make sure we get our share of revenue from the market and that's what we're doing now - putting more focus on the revenue side, which is why we've introduced new services and products over the past few months, putting more emphasis on ancillary sales.

Our revenue is €2.3 billion and our target is to make 6% EBIT - that's the long-term target. Our saving programme was a €200-million target, which we achieved at the end of 2014.

Of course, ticket revenues have been declining for everyone in this business, so we can't say if all of that €200 million exists in our bottom line. It's there, but some will go to compensate declining revenues.

Around 60% of flights into Helsinki are with Finnair. We have three runways there and, as they expand, the terminals will have to grow. There are expansion plans for the terminal in place. The landscape is in a state of flux as we speak.

JACDEC looks at every aspect and measures it with operational statistics. Every airline must have some sort of safety system to securing flight safety - we drive that aspect continuously. We feel that the work needs to continue.

Our current standing is very good but we feel that in order to keep it, we have to put more work into it, day after day, to drive for new levels of excellence. That's very typical for us to drive safety and drive those statistics. It's part of everyday operations, not a separate investment. It starts from transparency and openness; a reporting culture and knowing what's happening. One needs to know and learn of the little things that could go wrong through the reporting culture, through technical services or flight crews or any part of the operation. When we see things going not as they should, that's the time to act.

The Airbus A350 also features an advanced pure air-filtration system that changes the air in the cabin every two to three minutes. Draught-free air management, adjustable multiple temperature zones and a lower cabin pressure also enhance the well-being of passengers and crew.

The eco-smart design of the A350 also brings more than a 25% improvement in fuel efficiency and operating cost over the previous generation of aircraft in its class, significantly reducing the carbon footprint of Finnair and its passengers.

Finnair had the best on-time performance in 2014 among European major carriers with 90.58% of flights arriving on time, according to FlightStats.

The award is based on FlightStats' analysis of over 32 million flights operated by 250 airlines globally in the past year - which clearly showed that Finnair and oneworld members maintained a more punctual operation across the 12 months than their counterparts in the other global airline groups.

Finnair is the first airline in Europe, and only second in the world, to be certified as a Stage 2 operator in the IATA Environmental Assessment (IEnvA) programme, an environmental management system designed to independently assess and improve an airline's environmental standards. 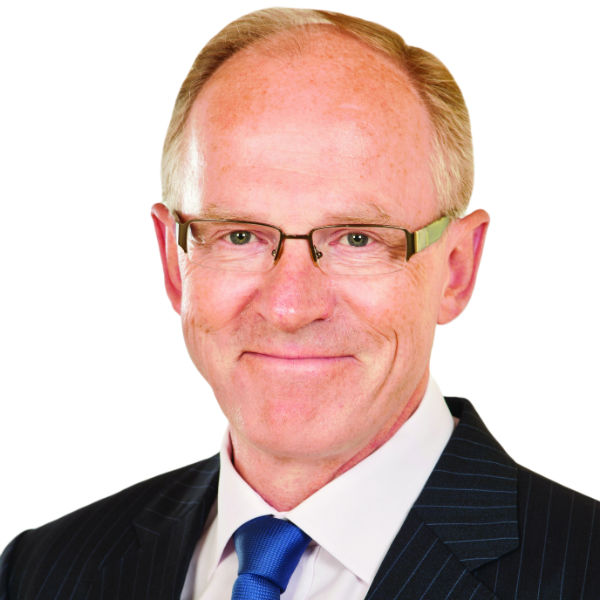 Pekka Vauramo joined Finnair from Cargotec, a Finnish cargo and load-handling company, where he held different management position between 2007 and 2013. Before his transfer to Finnair, Vauramo was based in Hong Kong from 2010 as COO of the MacGregor Business Area. 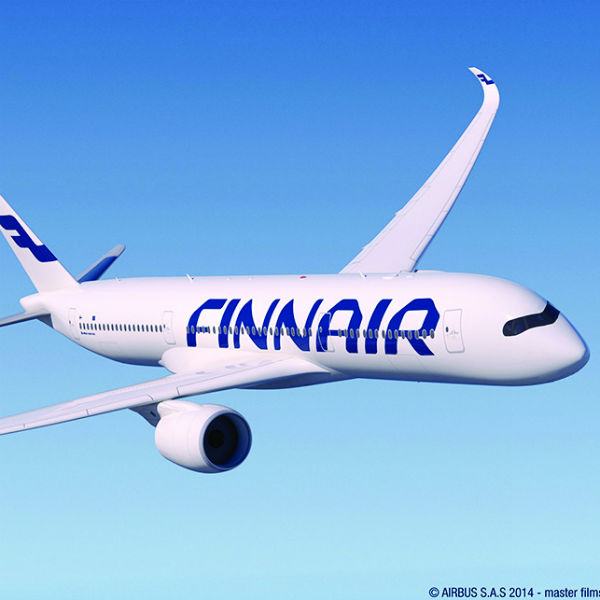 The new Finnair A350 airbus. 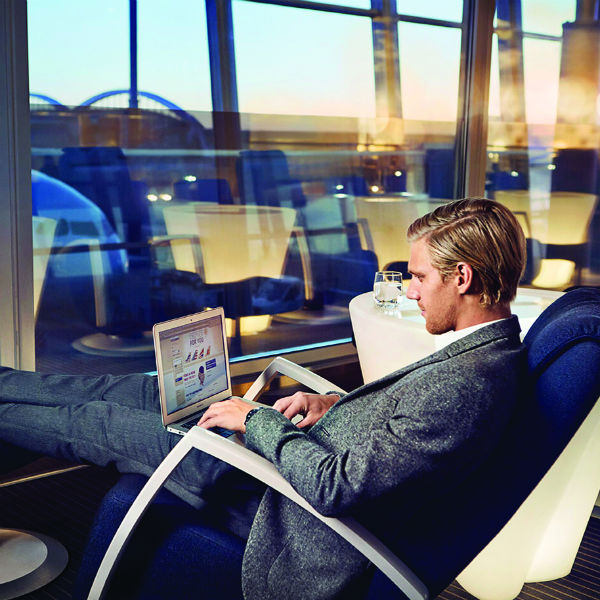 Finnair has a luxurious lounge for passengers. 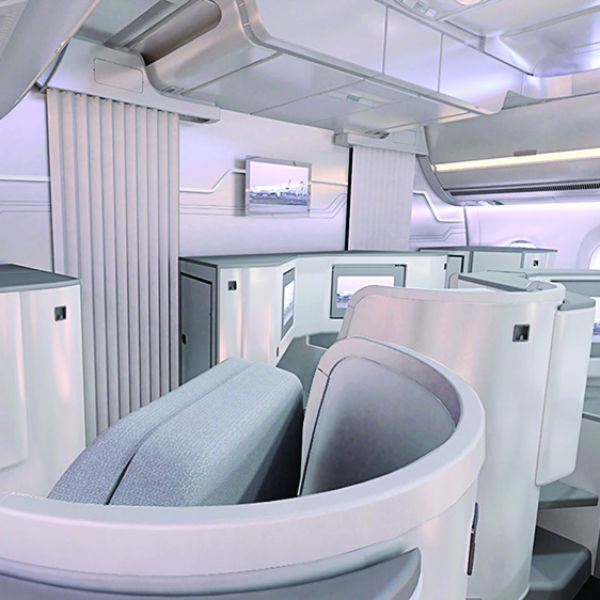 Finnair’s A350 business-class cabin has a wealth of space. 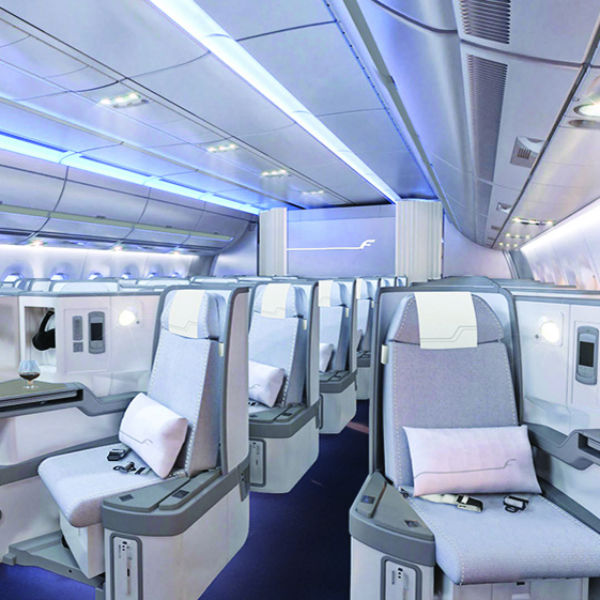 Each chair will now lay flat for total comfort during flights.