Microsoft has dominated the tech landscape for more than 40 years, but has only ever had three CEOs. Stephen Hall went to Lords cricket ground in London to meet its latest figurehead, Hyderabad-born Satya Nadella, who puts empathy at the centre of his vision for the Silicon Valley giant.

There is comfort to be drawn from the simplicity of cricket. At the UK’s cathedral for the game, Lords, Microsoft CEO Satya Nadella cuts a relaxed figure as, dressed in regulation whites, he bowls a few balls in the autumn sunshine.

The 50-year-old is Microsoft’s first chief executive born outside the US, and joined the company in 1992 from SunMicrosystems. His appointment as CEO in 2014 surprised many, but his two years in charge have galvanised Microsoft. The company’s stock has risen 60% since Nadella took over, and the fact that he has redirected the business strategy from a stalling smartphone foray towards a flourishing cloud enterprise is equally impressive.

It’s been over three decades since Bill Gates’ ‘computer on every desk, in every home,’ call to arms led to the software giant’s all-out assault on the marketplace. Nadella has redefined the company’s mission statement, and technology has pervaded every area of daily life. Despite the modern condition of near-permanent connectedness, Nadella believes the importance of empathy has increased.

Upon his arrival, the tech leader began to apply his brand of humanism, fashioned by his experiences, into the corporate environment. He has argued for Microsoft to fight to rediscover its soul and has assimilated techniques, such as mindfulness, into his leadership teams while working to break down barriers between the company and its customers.

“I think a lot of people when you translate the concept of empathy into a business concept, might think, ‘Well, Microsoft is involved in a ferociously competitive marketplace, it has to be cutting-edge and tough, why is it such a significant part of your leadership?’” he muses. “When I think about our business, at the core of it, we have to drive innovation that meets the unmet, unarticulated needs of customers. That’s it.”

The company has historically met those needs by putting computers in offices and providing the everyday software that enables modern businesses to function. Microsoft has now designed new software that could change the working environment all over again.

The HoloLens, a holographic augmented reality (AR) headset, blends the physical and virtual worlds, enabling engineers to build complex models in minutes. There is potential for this equipment within the office as well; instead of sitting at a desk, one could work while standing up, or walking around without a keyboard. The Surface computer is another flagship Microsoft product making waves in global markets. Nadella explains that Microsoft customers expect the company to get in touch with their real needs, through these products, and this, he believes, requires a deep sense of empathy.

You can’t go to work and say, ‘Let me switch on that empathy button and be great in business.’

“The real challenge is you can’t go to work and say, ‘Let me switch on that empathy button and be great in business.’ So that’s one of the reasons why I think it’s about learning from life and then, of course, being able to translate that to work, as well. I’ve found this is the way to think about harmonising what is most important to us as humans, and what is most important to us as organisations, trying to create value and, perhaps, even as a society trying to adapt to change.”

This core value system has been sculpted by his journey from his origins in the city of Hyderabad in India to his arrival in the US at the age of 21. It has since been influenced by his son, Zain, who was born with cerebral palsy.

“When I think back to these moments, that, perhaps, more than anything else, reshaped who I am and what I am today. I was 29 years old, my wife Arnu and I were the only children of our respective parents and were really excited on the birth of our son, even an hour or two before he was born,” Nadella recalls. “If you’d asked me what was going on, I would probably say we were thinking about the nursery being done, how things would change with a little boy at home. But then life changed that night when my son was born, and I struggled with it for quite a while – maybe for several years.

It’s deeply important for us as parents, as individuals, in your family and at your work, to see things through others’ eyes.

“For Arzu it was natural, she came out of it by driving Zain up and down to therapies, giving him his best chance. Only through watching her did I realise that nothing had actually happened to me, but, something had happened to my son, and it was time for me to step up as a father. I realised that it’s deeply important for us as parents, as individuals, in your family and at your work, to see things through others’ eyes. People say to me empathy is important, but it’s life’s experiences that teach you empathy.”

His rise to the upper echelons of technology and leadership has been influenced by his parents. His father is a civil servant who trained as a Marxist economist, while his mother is a Sanskrit scholar. Despite their divergent ideological stances, he acknowledges that his parents’ differences shaped him.

Nadella explains that it was his father’s intellectual ambition that taught him the value of continuous learning, and his mother the price of living in the moment, “not in some banal sense but to be able to truly absorb what is going on”, he says. “She would always say to me, ‘Are you happy?’ and for a long time I would be irritated and ask what that meant. Why would somebody be just happy? Then, I realised there was a deeper question, which was, ‘Are you able to do your best and more importantly absorb what is happening around you?’ Ideas excite me, but this notion of empathy grounds me; I think these are the two things I picked up from my parents.”

The corporate world has often been chastised for its competitive nature, and incorporating this notion of compassion into this environment can be difficult. Drawing inspiration from his roots, Nadella has introduced books on non-violent communication to his leadership team in an attempt to change the company’s culture. The CEO recalls a time when he and his colleagues at Microsoft used to attend a class on ‘precision questions’.

“The idea was to destroy everybody’s idea in the first five minutes by asking these highly analytical questions,” he recalls. “This should disrupt the speaker’s hypothesis, which is actually a very useful tool to have, except it was being used as a tool for offence, so this is one of the reasons why I said, ‘Look, if you want to be an effective leadership team, we will have to practice non-violent communication.’”

This method of communication, instigated by the softly spoken CEO, chimes with the culture Nadella has implemented at Microsoft; he is consistently attempting to grow in order to be the best leader he can be. The company is also attempting to evolve from its successful past and adapt to a new era of artificial intelligence and quantum computing.

As part of his own evolution, Nadella strives to be a ‘learn it all’, rather than a ‘know it all’. “The most important thing that I can do as CEO is not to talk the talk, but live it,” he says. “It’s easy to say that’s all you can do in life and, in fact, change, in general, is hard. As humans, we would rather have others change, not us. That’s how we are wired; that struggle is what inspires my own leadership.” 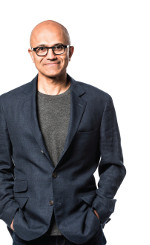 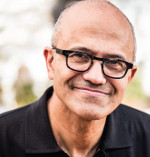 Nadella is pushing to be the best leader he can be, and has learned important lessons from his family, including the art of continuous learning and living in the moment.