The USPS’s Ellis Burgoyne reveals how embracing technology could stop the business from drowning in debt.

It has been an ugly few years for the US Postal Service (USPS). The semi-independent government agency has been losing money since 2007, and now a bigger challenge is looming large - it is fast approaching its debt ceiling of $15bn.

Although the agency can borrow up to $3bn a year until it reaches this limit, it expects to run an annual deficit north of $8bn by the end of 2011. Internal analysis suggests that it could face a deficit of around $238bn by 2020.

The USPS used to be seen as one of the few American institutions that could never fail, but as the debt racks up it is clear that this once-thriving business is slowly losing its influence and profit-making ability. Its decline is not only a consequence of the economic crisis, but also internet communications displacing physical mail. In October 2011, the USPS's annual survey revealed that the average household only receives one personal letter every seven weeks, compared with a letter every fortnight in 1987.

Although the future of the USPS is looking increasingly bleak, it is unlikely that the agency will shut down altogether, but it is in need of rapid and drastic restructuring to remain financially viable.

Technology to the rescue

Embracing new technology is something that the USPS is increasingly focusing on.

"Physical mail is becoming outdated, so we're using technology to try and help to reduce the diversion from hard copy to digital," says Ellis Burgoyne, the agency's CIO.

"We've just gone through a major restructuring; it has forced us to become leaner and look at parts of our business more closely, especially from a tech point of view. We are trying to leverage technology to help mail retain its value. We're looking at solutions based around tracking, tracing and visibility.

"We help the rest of the organisation by supporting their solutions, especially on the operational side. We're now looking at mail processing equipment that has been around for almost 20 years, and using technology to revamp it as we don't have the money to buy new machines."

Investing in new technology is vital in order to keep pace with email and other digital means of communication, but clearly this is not an easy task for the USPS.

"Keeping to your operational budgets, and trying to gain research and development money is an issue for almost all CIOs," Burgoyne explains. "But when you're in an organisation like ours, which is struggling with cashflow and having issues around liquidity, it is even more difficult."

In order for the company to keep moving forward, Burgoyne says it is essential that the CIO understands the organisation thoroughly and is able to communicate with board members effectively.

"In this position, at the senior executive leadership level, it is vital to be successful at convincing the organisation that you're worthy of investment," he says. "You must be able to create a very strong business case; it is important to lay out the plan and show how the technology can help the CEO achieve his or her corporate objectives. If there is a disconnection, you don't get the funding."

Burgoyne believes that the USPS's investment in technology has kept it afloat so far: "We were given a big enough budget to be able to address the technology upgrades that we need to help the business grow. We're confident that there is enough money in next year's budget to achieve a pretty aggressive plan, but we'll see."

" The USPS’s annual survey revealed that the average household only receives one personal letter every seven weeks."

The USPS is not only facing ongoing problems as a result of online communications replacing
its main services: around 100,000 of its employees are eligible to retire over the next three years. The number who could retire today is 157,000.

This is an exponential financial issue for the agency, due to a 2006 congressional mandate that requires it to pre-pay into a fund that covers healthcare costs for future retired employees. Under the order, the USPS must pay $5.5bn annually until 2016. This is putting a huge strain on the agency, so it is looking for approval to delay the payments.

"The significant number of staff eligible to retire poses many challenges," Burgoyne says. "In terms of cost it is a problem, but there is also our strong desire to retain our employees - we spend a lot of time trying to keep our people because talent is critical to us."

"Around 100,000 of USPS employees are eligible to retire over the next three years."

Burgoyne knows the USPS better than almost any other employee. He began his postal career in 1978 as a letter carrier, or postman, in Inglewood, California, and went on to work in managerial posts throughout the organisation. He was promoted to his current position last year.

"I think starting out as an entry-level letter carrier has been very important in terms of being effective as a CIO," he says. "I understand the organisation from the ground up, and that's crucial. Not only did I start out at that level, but I've managed almost every operational job there is in the organisation and worked my way up the line of progression to become the CIO, so I understand the business extremely well."

The role of the CIO is also changing, embracing a much more active role in leading enterprise change, and it is clear that CIOs are now rising up the management hierarchy. Last year, a study by PricewaterhouseCoopers found that 64% of CIOs are supporting major strategic projects.

"In the IT world, it has always been hard to try and get a seat at the table and be part of the company's strategic development, policy and direction," Burgoyne explains. "Many CIOs have struggled to cast off the mantle of being merely 'the order taker' - that is, being the one who takes orders from the rest of the business. But as technology, and the need for it, has evolved to become more critical to the business strategy - as opposed to being more transactional - the role of the CIO has grown in importance.

"Today, the CIO is more likely to be a key member of the executive team; CIOs can take advantage of this and begin integrating technology into the broader business strategy. And that's really how the role is changing in terms of business."

A couple of decades ago, it might have seemed unimaginable that the USPS would be struggling with debt. While technology and innovative solutions could go a long way towards revamping the business and getting it back on its feet, these changes may not be enough. How to keep the agency from going the way of the Pony Express remains an open question, but the CIO will clearly play a critical role in finding an answer. 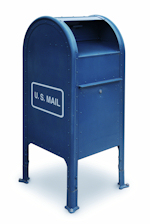 The financial downturn, ageing employees and the growing dominance of web-based communications have all contributed to an increasingly alarming balance sheet at the USPS.